In 1989 the Toronto real estate market experienced a massive correction that nearly bankrupted me and many others.  Many brokerages went under and people lost huge amounts of equity.  I was a top REALTOR® going into that crisis and my terribly difficult experiences surviving that time has defined who I am a real estate consultant now.

As we look to understand the potential impact of COVID-19 this story feels relevant.  It is not a story I am proud of but it needs to be told. 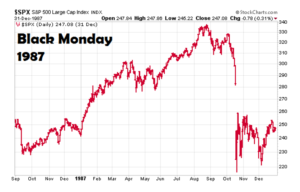 I started selling real estate in 1985 at the age of 21. I quickly got out of the gate landing my first listing in the first week and learning on the job with a mentor over 8 deals in the first two months. I worked for Canada Trust – a little storefront office in West Toronto and paid them 50% of the commission.

The next few years were filled with learning, excitement, adventure and lots of money. I moved to Re/Max because that’s where all the top agents were going.  I was getting noticed.  I was selling Lakefront properties with Christopher Invidiata, had a strong farm in High Park where I lived and was doing land assemblies for Canada Square Development Corp.  (now known as The Kolter Group).  I remember the day Claire Estlick came into my office to inquire after the young hotshot.

And then the stock market crashed on October 19th, 1987. Black Monday. Markets across the world dropped from 22-40% and created panic, fear and volatility.

It was with great relief to agents that the real estate market continued to rally after Black Monday.  We told ourselves that it was because people didn’t trust stocks and everyone was putting their money into something that never went down.  The market was active, prices were rising fast, and life was good.    We were frantic and driven and crazed.

And then, one day it all ended.   Real Estate had reached a crazy peak and when the banks raised interest rates in an attempt to slow inflation and unemployment sky rocked, the market crashed.   I remember sitting in the office feeling the calm before the storm.  My intuition knew that everything was about to change drastically.

What followed from the peak in 1989 to the trough in 1996 was 7 years of real estate depreciation.

Here is my story through that time.   In the early days, we still sold some homes.  It was hard.  We were used to our listings selling in a matter of days at inflated prices and now, only a small percentage of listings would sell at all and you would have to work very hard and very smart to get any market share.  Commissions were hard to come by.  I had big expenses.  I had a fancy car lease, mortgage payments, debt payments for the line of credit and a car phone bill at over $750 per month.  The banks had encouraged young successful realtors to take on debt to expand their business and to buy investment properties and I didn’t know any better at that time. 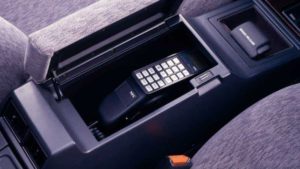 We limped along for a while.  If you were really committed to prospecting and working very smart you could squeeze a deal or two a month out and a handful of rentals would round out your revenue but it was only a small percentage of realtors that were doing any business at all.

I had been working for a few years on a massive land assembly for Canada Square Development Corporation (now The Kolter Group) which would give them a beautiful site in Clarkson in Mississauga for 350 condos and would give me a hard-earned $120,000 in commission ($225,000 in today’s dollars). The deal was done, all owners were under contract and the developer firmed up.  Each of those 7 homeowners bought homes once those deals were firm.  And then the day before closing, the developer decided not too advanced funds.  The offers were in a numbered company and the developer believed they could weather the legal battle that would ensue.

It was a terrible mess.

None of the owners could close on the homes they had purchased which meant most of those people couldn’t close and it was a huge domino effect.   It was hell for them and hell for me. I had put these people into this situation and I could hardly breathe never mind sleep or function.

The guilt was overwhelming and still stings.

The developer said he would be willing to close if they would reduce their price by 50%.   Months later, the developer ended up with the property and paid about 75% of what they had originally agreed to.  Somehow we managed to unwind the legal nightmare and find other homes for the families to move to.  It was the most difficult work I have ever done. I didn’t care about the commission.  I made very little – barely enough to keep me afloat.  I hated real estate.  I hated developers.

Meanwhile, brokerages were failing, mergers and acquisitions were everywhere and then in October 1991, the real estate community was shocked when Re/Max Renown, the biggest and most successful Re/Max Franchise went under. I worked for this brokerage.   It was sudden and it was complete.  We were closed and had to hustle to get our licenses moved to other brokerages.  There was no commission trust then and the rescue fund from OREA was empty and so, we received no money.  I had several closed deals that were unpaid and many unclosed deals that eventually closed but I didn’t get paid on them.  I lost over $60,000 ($110,000 in today’s dollars – we eventually got 30 cents on the dollar three years later).

At the same time, the banks called our loans.   Interest rates had jumped back up in an attempt to slow inflation but the effect was catastrophic on the economy and on the real estate market.

I was told by many to declare bankruptcy but I just couldn’t do it.  My value system was stubbornly strong and so I went to work doing rentals.  Many people had lost their homes and people with new condos couldn’t sell them for anywhere near what they paid so there was an opportunity there.  I had big debts to repay so I did a ton of rentals. One month I did 30.  The day I paid off my loan I quit real estate and started working at my boyfriend’s bike store.

I loved the bike shop and eventually married the boyfriend and had an awesome child.  We lived low for a bunch of years and when the real estate market started to come back, I re-licensed and started what was to be a very successful second career in Real Estate. 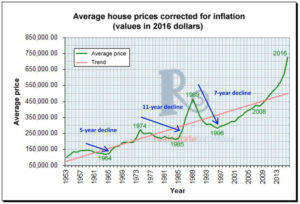 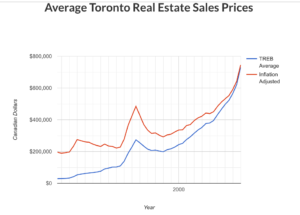